My encounter with Claret

My encounter with Claret 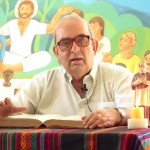 I discovered Claret on a soccer field. I was a teenager trying to score goals and father Alberto Chang, a friend of my family, invited me to play with the Claretian seminarians. I cannot remember if I won a lot of matches or scored a lot of goals. What I gained was absolutely greater: I discovered a charisma that began to nourish me from the inside, which made me look at life beyond the usual horizons: life went on beyond where the sea ends. There were whole folks which did not even know Christ Jesus, He who helps release the chains that prevent people from being happy.

Knowing Claret was to discover a special way of living my Christian condition: a Christ turned nourishment to invigorate us, a woman all-heart to care for us, a Joseph able to teach God become a man, through work and family.

Since then, I am grateful to life for putting me in a place where I can learn, I can communicate, I can evangelize by proclaiming liberation to people.

Such spirituality has held me up, encouraged and nurtured me. It seems that God sets us a goal and offers us many tracks to get to it. What matters is to choose the right track and move forward without compromise.

Surely avoiding obstacles, sometimes overcoming discouragements, some other times stepping back to retake better drive forward. And as it is an experience within a charismatic family, you never feel lonely in this commitment: a whole brotherhood helps you to achieve the goal.

I can say that I have discovered loyal, deep, sincere friends within this Claretian family. Blood ties do not bind us. We are united by ties of friendship, illusions, certainty, confidence, which are quite often much stronger. Who has not ever come across that person that makes you a better person?

Claret, by showing me his life, his utopias, his failures and successes in following Jesus, invites me to follow his footsteps: and thus be sure to reach a good end.

J. Agustín Cabré Rufatt (1940) is a Claretian missionary priest and Chilean journalist. He professed as a Claretian in 1957 and was ordained priest in 1968. He graduated as a journalist at the Catholic University of Santiago, Chile, in 1976. He has written a number of books among which: Evangelizer of two worlds; Cross,fire and flags; Mariano or the power of God; The word of God is not fettered; The history of the Claretians in Mexico, Short stories to keep calm, My spirit is for everyone…