My Encounter with Claret

My Encounter with Claret

It was the year 1951. My six-month-old brother had swallowed a small metal cross with 8 tips, a wick holder for the oil lamp used at night. The doctors had given up hope on him. They gave him back to my mother to die at home because there was no way a baby could excrete that metal without it cutting its intestines. My mother, feeling desolate, embarked on a journey back to the village. A woman approached her on the train when she saw her crying. My mother told her the terrible drama. The woman comforted her and gave her a picture with a relic as she said, “Pray to this saint with devotion and you will see that everything will be well.” My mother, a woman of deep faith, made a novena to this new saint. A few days later, my brother passed the metal without any problem. The doctors could not explain how it happened. My brother, Victor, is now 66 years old and lives in Argentina.

A few years later, a bashful missionary came to town and asked me if I wanted to go to the seminary. I was 11 years old.

He spoke with my parents and my mother related to him what had happened to my little brother. Yes, the newly canonized saint was Anthony Mary Claret and the missionary was a Claretian, a very timid newly ordained priest who was doing his first mission.

My life in the seminary was a happy experience. We went through many hardships, even hunger, but we were happy. The years went by and I finished my theological studies in Washington, D.C, in the United States and returned to Argentina to work with university students for 6 years. One day I received an invitation from Father General asking if I was willing to serve in the Philippines since I knew English.

I arrived in the Philippines in early 1978 with a 5-year agreement that later turned into 27 years. The reality of this country, socially very similar to our Latin American countries, launched me into a totally new ministry: sharing in the Philippines the experience of a new model of Church, inspired by Vatican II, vibrant at that time in Latin America.

I gradually learned the job of “publications” and it was there that I had a strong encounter with Father Claret. I remembered all the editorial work of Father Claret, with the poor means of the 19th century, especially the “Bible with little hands.” The obstacles were great, but as it was written in one of the first books I published, “If you know where you are going, the world will stop and let you pass.” It was not easy. When I asked the Provincial permission to dedicate myself to publications to bridge the Church of Latin American with the Philippines, he told me, “Remember that you are a parish priest and that is your first obligation; what you do with your free time is up to you. And second, never ask us for money because we do not have.” Thus was born Claretian Publications in the Philippines. After a couple of years I was already full-time dedicated to publications. I have always been enlightened by the intuition of Father Claret: “Use all possible means for evangelization.” Publications was a new ministry for me in which I had no experience; I learned by doing! I remember that when we had published 160 titles we looked at Father Claret again, remembering that with the poor means of his time he had also come to publish a similar number of books and booklets. But we kept going and now we already have more than a thousand titles published. Then came the Bible: “servants of the Word,” another feature where Father Claret served as an inspiration and model. That “Bible with the little hands” inspired us to bring the Word of God to the ordinary people. We had published the Bible in 12 languages ​​and are currently completing a new translation into modern Chinese, with comments and a guide to Lectio Divina for each chapter of the Bible. In 2006 I left the Philippines for a new assignment and the work of publication there continued with the local Claretians. My new assignment brought me to Macao for a work focused also on publications, but directed especially to Mainland China. I asked myself many times: What would Father Claret do in this immense frontier? The definition of a missionary that Father Claret gave us in his autobiography inspired me—a great manifesto!

With Cardinal Gaudencio Rosales, a few days ago in Macao.

Father Claret made use of the help of assistants to carry out his mission. Over the years, a group of highly selected people who felt the same passion for this ministry joined me. They are a group of lay people inspired by the Claretian charism and have dedicated their lives to this work and are consecrated for the mission. A saying from Confucius comes to mind: “Find the work you love and that will be the last day of your life in which you work.” These collaborators live for the mission. Also, over the years, some co-workers discovered their missionary vocation and today they are Claretian Missionaries. China was and is a unique experience. It is something unheard of for a foreigner to publish books in China, however, a voice in my ear reminded me: “Nothing daunts him….” What was done in the Philippines—to foster a new model of being Church through publications, we now do in China—with all the necessary permissions, of course. An experience beyond all expectations was the contact with a printing press in China, where for 20 years we have been printing our books, especially the Bibles that we send to different countries. In February 2017, there was an act of recognition in Macao for the work done and was attended by several leaders of Amity Press (a company with 600 employees and only 3% are Christians—it is the largest Bible printing company in the world). This is what Mr. Li, the former Director said:

“If I have done something, it has been through the influence of Christians, people like you and others who contribute their energy, time and money for the missionary work. Although I am not yet a Christian, it gives me great joy to see the Bibles coming from the printing press because I know that people are waiting for them and they will bring peace to their hearts which is good for a harmonious society.” These days mark the 60th anniversary of that encounter with a young Claretian priest who asked me if I wanted to be a missionary. The evangelizing dream and the missionary zeal of Father Claret have accompanied me in all the stages of my life, and in God’s plans, even as my little brother was miraculously healed through the intercession of that newly canonized saint. 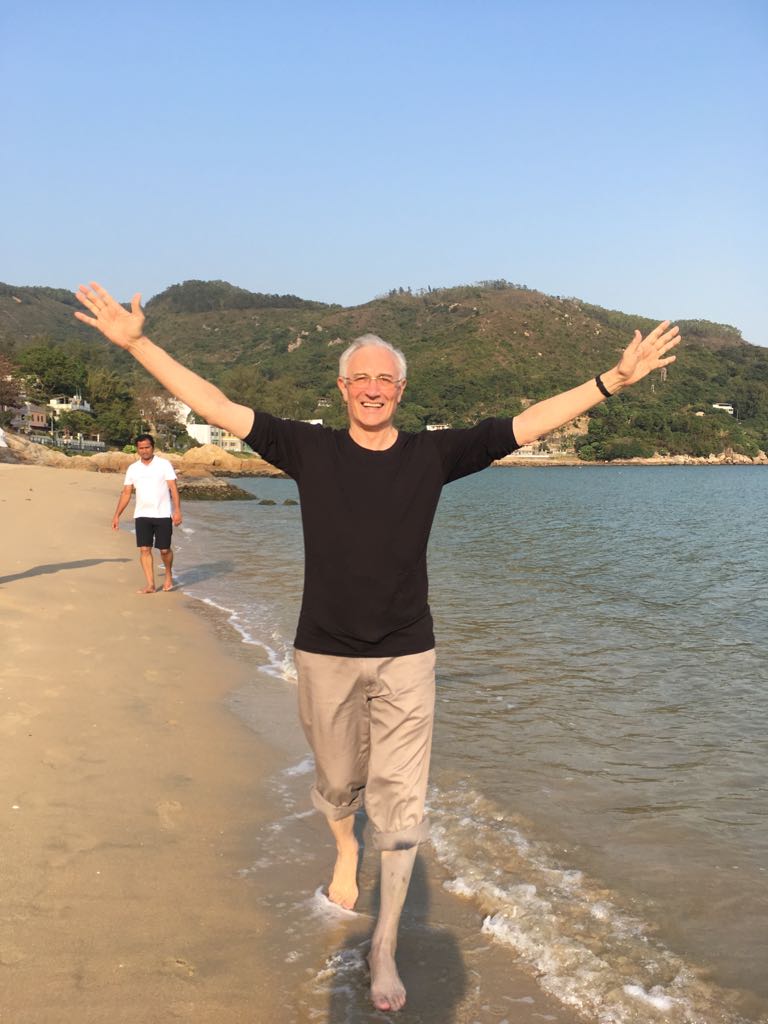 This afternoon on the beach next to house in Hong Kong.