A pilgrim arrived from Bolivia

A pilgrim arrived from Bolivia 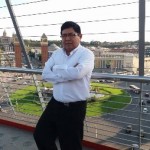 The reason for my trip to Spain was the beatification of the 109 Claretian missionaries, martyred in 1936-1937. The celebration of the Eucharist was presided over by the representative of Pope Francis, Cardinal Angelo Amato, prefect of the Congregation for the Causes of Saints, at the Basilica of the Sagrada Familia in Barcelona, ​​on October 21, 2017. The day before, Friday, October 20, at 7:00 p.m., we had the Prayer Vigil at the Church of Heart of Mary in Barcelona, ​​in honour of the 109 Claretian martyrs. The motto is “Missionaries to the end”.

These two events were a very significant celebration for the Church and for us as Claretian family. May the light of the testimony of our martyrs illuminate our lives and prepare us to be courageous missionaries to the end. Like the martyrs, we also join hands and prepare ourselves to strengthen our missionary commitment.

Taking advantage of the visit to Barcelona, ​​I had the opportunity to know the Claretian places, towns and cities where Father Claret preached. The churches, convents and monasteries visited have historical, artistic and cultural significance, but, above all, I highlight their symbolic and inspiring value for us as Claretians. As we know, this city was where our Father Founder, very young, stayed as a student and technician of the textile branch. Here he preached, later, as a missionary and archbishop. Here he founded his publishing house, La Liberia Religiosa. In this city he accompanied Queen Elizabeth II as her confessor. Here also as a founder, he lived with his Missionary brothers the Sons of the Immaculate Heart of Mary.

We started our visit in the mother house of Vic, where we also have the Claretian Museum, the Claretian Library and the CESC-Claretian Spirituality Centre I could visit and experience everything I had studied in the novitiate about Fr. Founder’s life. Especially contemplating the sepulchre of Fr. Claret filled me with emotion and my heart felt moved. This filled me with energy as well as with joy.

The next day we went to visit the community of Montserrat and the museum. Also in the afternoon we visited the hermitage of Fusimaña. Next to the altar of our Mother, we have entrusted ourselves to her so that she continue accompanying us in the mission that the Father God has entrusted to us.

We also visited the community of Barbastro and the museum. When the Claretians tell us the testimonies of the martyrs, we realize that they were convinced of their vocation and among them they felt strengthened. They really felt configured with Christ, to give their lives for love. In addition, they died forgiving their executioners. Also, we visited the community of Zaragoza, we were very well received by our community brothers. There we visited the Cathedral – Basilica of Our Lady of el Pilar. According to tradition, it is the first Marian temple of Christianity, since in it the pillar is preserved and venerated, in fact, a column of jasper that, according to tradition, was placed by the Virgin Mary who, still living in Jerusalem , would have appeared in mortal flesh to the apostle Santiago on January 2 of the year 40. Documentary evidence is not provided for in the tradition. It is visited by many parishioners from other countries.

Next, we visited the community of Colmenar Viejo. We were also very well received by our Claretian 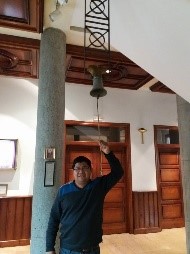 brothers and especially for me it was a great pleasure to meet with Fr. José San Romàn, cmf, who was my novices’ master at the novitiate in Cochabamba Bolivia in 2009. Fr. José Ramón Zanz, cmf, current trainer of the students. They accompanied us some days to some Claretian places, like Segovia. In this ancient city I could see the Roman aqueduct and the silhouette of its Alcázar, which was a castle built between the 12th-13th Centuries, nowadays it is a beautiful museum visited by many tourists. We also visited the Holy Cross of the Valley of the Fallen, also quite visited by tourists. The beautiful thing is that the cathedral is underground, where is the tomb of Franco and other politicians of Spain. We also visited the Monastery of San Lorenzo de El Escorial. It was founded by King Philip II of Spain in 1554. It is currently a beautiful museum visited by many tourists, famous for its sculpture and painting.

I thank God for giving me the opportunity to know the Claretian places, where the root of our congregation began. Also to Fr. Juan Carlos Bartra, cmf, Provincial Superior of the Province of Peru-Bolivia, for trusting in me and sending me to live the experience of the beatification of our Claretian brothers, martyrs, and to know the Claretian places in Spain. I also thank our Claretian brothers in Spain for welcoming us with open arms and for their hospitality. Thank you, brothers, for your sincere friendship; Love identifies us and unites us.