Threads woven in my relationship with Claret and the claretians

Threads woven in my relationship with Claret and the claretians 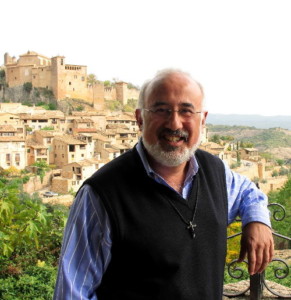 With utmost affection I date back to Teresa, my matern grandmother. My childhood years are accompanied by her, I visit with her the chapel that the Claretian missionaries had in Conde De La Cañada Street in Ciudad Real. In that place in La Mancha, whose name I do want to remember, a good number of novices gathered, who endured harsh winters and hot summers. In the evenings she liked to pray the rosary with her grandchildren, and there and then was how I began the pious relationship with Mary, which later became that of a son, lover and shelter.

Over twelve years will pass until the grace of God opens my heart again through the sacrament of Reconciliation. Why am I a Claretian? Perhaps the event of that confession sowed in me a concern to know more deeply the life of Jesus, to wonder what my place in the world is. What do I feel called to? I am a Claretian for pure loving Providence, for answering a question that Fr. Marciano Fernández Valbuena, cmf. once asked me: “Have you ever thought of becoming a missionary priest?” At the beginning I responded with evasiveness. Excuses appeared, also other options… The question resounded after a year. On this occasion I agreed to start a time of discernment. My encounter with the parable of the hidden treasure (Mt 13:44) set sail for a new journey. I stopped looking back. I gave up other roads I had already started. Nothing was comparable to the treasure that filled and still fills my heart with immense joy.

A family conflict arose. My father was hopping fervently that I would carry on the shoe trade that he was building up day by day for the sake of the whole family with so much work and sacrifice. We all put our shoulders together. My brothers and I combined hours of study in our university careers and hours of support in the family business. When I read Fr. Claret’s autobiography at that time, it was very good for me to be seduced by the missionary force and the search for the will of God that the Founder Father had had at all times. I did not want to disappoint my father either, but when I told him I wanted to be a priest, he felt disoriented. He had already prepared the opening of a business for me; I had completed my studies in Teaching and had already started working. I think that at that time my mother, with her priestly heart, was the great catechist and pedagogue of my father, she knew how to sustain him and put peace in his struggles. Her mother’s heart became permanent intercession. She was always docile to the will of God and firmly believed in loving Providence that cares for all. This is the best inheritance I have received in my missionary life.

Without the wisdom and good accompaniment of Fr. Master, Angel Garachana and the formators Lorenzo Camarero and Fernando Campo, the vocation received would not have been growing and maturing until reaching the first fruit of “forever”. On March 19, 1986, those words were spoken with personal and shared joy. Only time and experience gave it a progressive fulfillment. How much good it does to be accompanied! How many travel companions make possible what seemed impossible! During this time of formation a new spiritual experience was being woven: “Christ lives in me”, “No one comes to me if my Father does not attract him”. I remembered then the compass experience that Fr. Claret tells us. I noticed the need to be anchored in a center that focused my life more and more, to avoid dispersion, superficiality. The time of initial formation was culminating, new horizons, new faces, new tasks were opening up. The encounter with the pastoral life in the school and parochial world began. How to weave in new thread?

“You allocated a piece of vineyard to us and told us: come and work.” I remembered then Fr. Claret who said: “Fall in love with Jesus Christ and you will do greater things”. Welcoming Jesus Christ, with all my being, with all my strength, with all my love, represented the joyful privilege of being reached by the Lord of my hours and of my life. My heart was wide open, to what was to come, to the new realities and challenges that were knocking at the door. From the depths of my soul, I was ready to love the priestly and missionary life as it would come up. I deeply believed that “he who initiated in me the good work, he himself would carry it out”. I thoroughly experienced my vulnerability and discovered that where my wound was, there was also my gift. The time for sharing and giving began, the time of always needing the look of the Other, and of others, to be every day a receptacle for the gift received. I like to thank God for all he gives me, but I felt that I should also thank Him what I had not yet received and thus I could discover unsuspected forces that would also allow me to be myself.

“Row out to sea.” Now the grace received was the experience that marked Claret’s missionary life: “The Spirit of the Lord is upon me”. Oh Spirit of fire! Oh Spirit that makes all things new! “I will infuse you with my Spirit!” Yes, I let myself be guided and taught by the Spirit of Jesus to know and love him more. I feel that I was also born to evangelize and that I have to give more space to the Lord in my being and work. I never buried and kept the treasure that my life carries in clay pots. To show it, to guard it, to offer it, to embrace it, to thank for it, to make it known was the reason of my being and to be an evangelizer. He has moved and taken me through lands of young people, of formation, of popular missions, of parish communities, lands of pain and suffering, of love and joyful hope, of catastrophes and reconstructions, of anguish and sense of impotence, of death and of lifetime. It began to hurt my life and the threats against life. I was learning from the mission and from my missionary brothers to be a missionary of the Father. I learned to be sent, to be detached, to sow and share. This world, so complex and loved by God, became a motive for intercessory prayer. Fatigue and peace allied themselves to pray, without getting discouraged. Tired at the end of the day I have not allowed “the sunset to surprise me being angry”. The apostolic work was taking up my heart and my time. The proclamation of the Kingdom was the cause of my joy.

And now in the land of Fragua, sacred ground where for a time a “small number” of missionaries who renew themselves to the fire of the Word, in adoration of the Father, in faithful following of Jesus Christ and anointed by the power of the Spirit and by the heart of the Mother, where all the children fit, they all feel willing and driven to continue breaking their backs for the construction of the Kingdom of God. They do not do it as “lonely riders”, but in brotherly communion with those who have received the same charism in the Church and for the world.

I want to conclude the contribution that I have been asked to produce by recalling the simile of the loom and the fabric that Fr. Claret points out in his autobiography.

SIMIL OF THE TELAR AND THE TISSUE

“Out of so many things I have studied, and in which I have applied during my life, none have I excelled in so much as in the manufacture (weaving) … God had given me so much intelligence in this, that I had only to analyze any sample to instantly draw the loom with all its equipment, giving the same result … At first it was a bit difficult, but paying more attention… I used to succeed. When, after a lot of thought, I was successful in the decomposition and composition of the sample, I felt such a joy, I experienced such satisfaction that I used to walk around the house like mad full of happiness … “(Aut 58, 59).

The action of weaving integrates, creates, transforms, unites, associates and gives new life and identity… Expands possibilities and horizons, relationships, communications … enriches, reflects variety and richness better, generates new life. It supposes creativity, search of threads, combination of colours, patterns, materials. It involves clarity, having objectives, what we are going to weave, with what purpose, for whom, for what use.

I want to continue being the echo of the Word that makes me fall in love, that makes me free and makes my life happy from beginning to end. The victory of faith has made it possible to persevere in the gift undeservedly received.

(Brief biography of Salvador León Belén, to be added at the end of his testimony).

On January 26, 1959 … “How lucky I was to be born” …, in Miguelturra (Ciudad Real); a year before my older brother had been born, after my birth a baby came who died in childhood, and finally my brother José Luis. My first years of school, of games, of learning were in my hometown. From 14 to 17 I did the studies of baccalaureate and COU in the Labour University of Córdoba. After returning to Ciudad Real, I studied Teaching and began teaching for a year in a primary school. In August 1980 I started the novitiate in Los Negrales (Madrid). I was ordained on June 20, 1987. I completed a Degree in Catechetical Theology at the Major Seminary “San Dámaso” in Madrid. The Grace of God has accompanied me through Segovia, Burgos, Madrid, some mission time in Latin America and now again I am in Los Negrales collaborating in the experience of charismatic renewal: “Fragua”.