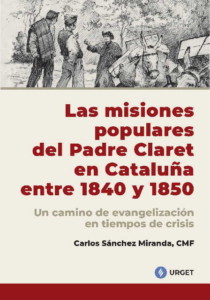 The book “The popular missions of Father Claret in Catalonia between 1840 and 1850. A path of evangelization in times of crisis” Editorial Claret, Barcelona 2019, 477 pp. written by Fr. Carlos Sánchez Miranda, CMF, has just been published. It is the outcome of his Doctoral Thesis, defended on March 5, 2018 at the Faculty of Theology of the Comillas Pontifical University (Madrid, Spain). It is also the first volume of the new “Urget” collection, which will publish studies on Saint Anthony Mary Claret, sponsored by the “Claretian Spirituality Centre” (CESC) of Vic (Spain). Other words will follow, among them the forthcoming: “San Antonio María Claret y el protestantismo de su tiempo”, which is the outcome of the Doctoral Thesis of Fr. José María Hernández, CMF, defended at the Faculty of Theology of Granada (Spain).

The title “Urget” is extracted from the biblical text that Claret chose as the motto of his archbishop’s shield: “Caritas Christi urget nos” (2Cor 5, 14). It condenses his experience of feeling urged by Christ for the proclamation of the Gospel.

The work by Fr. Sánchez is divided into three parts: I) The tradition of popular missions and the origins of Claret’s dedication to this type of apostolate; II) Claret’s evangelization tour in Catalonia through popular missions; III) Claret’s contribution to evangelization. Three annexes follow: 1) Villages in which Claret preached his popular missions, in chronological order (total 81); 2) twelve coloured maps of the villages in which he preached popular missions; 3) registration and transcription of the correspondence hitherto unknown (five letters), between the mayors of the city of Reus and the political leaders of the province of Tarragona about Claret’s possible visits to that town. An abundant bibliography (pp. 437-463) follows along with the archives consulted: Claretians, ecclesiastics and civilians; Claret’s publications between 1840 and 1850 and some others that are relevant to this study; printed documentation; press and periodicals from 1840 to 1850; list of Dictionaries and Encyclopaedias, books and articles (cited or consulted) and various web sites. The volume includes at the end a thematic index (pp. 465-470).

This is an issue studied for the first time in a systematic and exhaustive way, which has taken years of patient and thorough research. A work that from now on cannot be dispensed with if someone wants to know in depth this first fundamental period from which the missionary vocation of Saint Anthony Mary Claret starts and in which it becomes consolidated.

Fr. Sánchez is a member of the Province of Peru-Bolivia and is currently the Director of CESC and Superior of the Claretian community of Vic.

Hearty and grateful congratulations to our brother for this great contribution that will certainly enrich the entire Congregation.