Presentation of a fundamental book about Claret, in Vic

Presentation of a fundamental book about Claret, in Vic

On November 27, 2019, at 7:30 p.m., the presentation of the book “Las misiones populares del Padre Claret en Cataluña entre 1840 y 1850. Un camino de evangelización en tiempos de crisis” (“The popular missions of Father Claret in Catalonia between 1840 and 1850. An evangelisation path in times of crisis”) took place”; it has been published by Claret Publishing Co., Barcelona 2019, 477 pp.

It is actually the result of the Doctoral Thesis defended by Fr. Carlos Sánchez Miranda, cmf, at the Pontificia Universidad Comillas of Madrid (Spain). It is also the first volume of the “Urget” collection, which will offer studies on the figure of Saint Anthony Mary Claret (1807-1870), his life, mission, text and context. 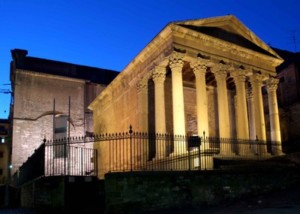 This presentation was held in the hall of the Roman Temple, a very important landmark for the ancient history of the town of Vic – Spain (2nd Century A.D.). So was it for Fr Claret who, being a seminarian, lived in the Tortadés House, located a few meters away from it, and because he visited the prisoners when this hall was part of the town jail. This hall was turned into a venue for cultural lectures many years ago. 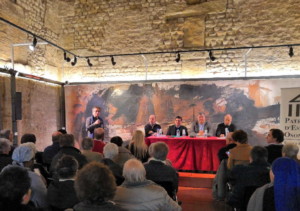 The presidential table was formed by: Dr. Jordi Figuerola, historian and professor at the Autonomous University of Barcelona; Mn. Josep Maria Riba, Director of the Episcopal Museum of Vic; Fr. Ricard Costa-Jussà, cmf, Provincial Superior of the Claretian Missionaries of Catalonia; and the author of the book, Fr. Carlos Sánchez Miranda, cmf.

The Provincial welcomed the audience and highlighted the importance of the book for our Congregation. Dr. Figuerola outlined the historical, political, social and ecclesial context of Spain, in which Claret lived. Fr. Sánchez offered a summary of his work and conclusions. And Mn. Riba sketched an update application to our current social and ecclesial situation. 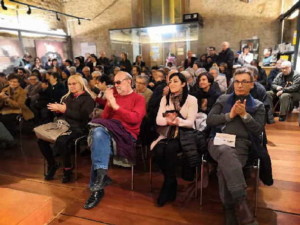 The audience both seated and standing packed up the hall and greatly appreciated the competence as well as the pleasantness, with which the presidential table carried out the event.

The book contains a systematic and exhaustive study that is the outcome of several years of patient and thorough research in libraries and episcopal, parochial and civil archives throughout Catalonia in which Claret carried out his activity as a missionary and founder of the Claretian Congregation.

A work, therefore, which from now cannot be dispensed with if you wish to know in depth this first fundamental period when Claret’s missionary vocation starts and becomes consolidated; vocation that he later, being archbishop, will develop throughout his life in Cuba, Madrid and all over Spain.