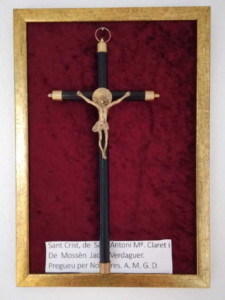 Mn. Josep Maria Armesto Miró, one of the priests of the parish of Santa María in the town of Castelldefels (Barcelona, ​​Spain), has sent us a precious relic. He himself explains the reason and history of this Crucifix. The text of Mn. Armesto is originally written in Catalan, and we keep the two sheets of his letter in the CESC Archive (Vic), as well as the framed Crucifix.

We are in the midst of the coronavirus pandemic crisis, Mn. Armesto writes in his letter, giving us the reason for his gift.Fearing that he might become infected and die and because of this, the Crucifix might get lost and thus lose its historical importance, this priest has decided to send it himself directly to the Claretians of the Mother House of Vic. Thus, he is sure that it will be taken care of and be given the veneration it deserves. He tells us the history of the relic and how it has passed on from Claret to this priest, and from him to us.

“D.O.M. This image of the Holy Christ was carried by Saint Anthony Mary Claret, in his missionary preaching. In 1849

[i]
, he was in the village of Viladrau. There it accompanied him on his visits to the sick in the farmhouses (country houses), where he sometimes worked cures with vegetable formulas. He was accompanied by a good lumberjack, from the Mas Bofill family. This good man saved him from a fall in the ravine of ‘Pregonés’; he carried him over his shoulders for a while until they reached the farmhouse; When Father Claret left the house, grateful, he gave the family this image of the Holy Christ to which the neighbours had great devotion. With this good lumberjack the good people of Viladrau went up to the Cross of Matagalls, which was made of wood, and renewed when a storm occasionally destroyed it. Later it was replaced with an iron one[ii].

Mn Armesto continues narrating that, towards the end of the 19th century, a group of illustrious Catalan writers, collaborators of the magazine “La Il·lustració Catalana”, visited the Cistercian monastery of Poblet. Among them were Don Antoni Gaudí (1852-1926, famous architect of the Basilica of the Sagrada Familia in Barcelona), Don Teodor Llorente (1836-1911), Don Josep Balarí (1844-1904), Don Emili Vilanova (1840-1905), the famous poet priest Mn. Jacint Verdaguer (1845-1902), and other people.

Mn. J. Verdaguer wrote an article in the newspaper “La Veu de Catalunya”. The result of this article was a growing friendship with Don Emili Vilanova i March, a great Barcelona writer. Mn. J. Verdaguer was his great friend and confessor. So much so that, when the poet priest was ill, he gave this Crucifix to D. E. Vilanova. In turn, before dying, this writer gave it to a Capuchin Father from Barcelona and in 1962 his family framed it on a board, which was renewed after a few years, according to what our benefactor says in his letter. Finally, Mn. Armesto writes, all in capital letters:

“I give this Crucifix to the Congregation of the Claretian Fathers, founded by Saint Anthony Mª Claret. May they preserve it, venerate it for having touched the hands of the Saint and having prayed before it the good priest and brilliant poet Mn. Jacint Verdaguer and many other faithful. In the glory of the Holy Trinity, the Mother of God, Saint Joseph, Saint Anthony Mª Claret. In Castelldefels, today March 19, 2020. Mn. Josep Mª Armesto Miró, C / Església 8, 08860 Castelldefels ”.

And he ends up by hand: “In these times, God knows how they will end up, I prefer, still living, to give this beloved relic to the Claretian Fathers. Union of prayers. Sincerely, Mn. Josep M. Armesto Miró”.

[i] We suppose that there is a transcription or oral transmission error regarding the year (1849) because Fr. Claret was in Viladrau as Regent of the San Martín Parish from May 1840 to January 1841. Therefore, the most probable date should have been within this period.

[ii] A cross placed on the top of the Matagalls (Montseny) dates back before 1614. The rough weather required the wooden cross to be renewed from time to time. Tradition says, as stated by J. Verdaguer in his writing La Creu del Montseny, that Claret did it with the people of Viladrau before leaving for Cuba (cf. J. VERDAGUER, Obres completes, Barcelona 1964, 718). On this fact, there are two possibilities. The first, that he did so in the period in which he exercised his ministry as regent of the parish of Viladrau (1840-1841); in this case, it had to be done in a hidden way from the civil authorities because all public religious manifestations outside the temple were banned. The second, that it was on the farewell visit he made to San Segismundo church, located in the area of ​​the Montseny massif and belonging to the Viladrau parish, in August 1850, given that civil laws at the time already permitted this type of religious activities.