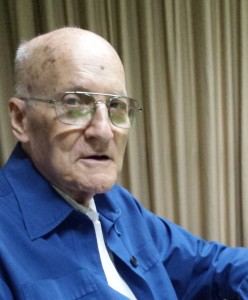 On June 17, 2021, the Claretian Fr. Gustavo Alonso Taborda died in the community of Rosario (Argentina). He had been born in Santiago Temple (Córdoba – Argentina) on August 12, 1931. He made his religious profession on February 11, 1948 and was ordained a priest on August 7, 1955. He received a doctorate in Spiritual Theology at the Angelicum (Rome) in 1957. His doctoral thesis, of which we have a copy in the Cesc archive, was on: “The prayer and doctrinal synthesis of S. Anthony M. Claret.” Returning to his country of origin, he was a trainer, teacher, preacher, book writer, and even a poet, an aspect that is surely little known. Later he held important Claretian positions, such as Secretary General (1967-1973), Provincial Superior of Argentina-Uruguay (1974-1979) and Superior General (1979-1991). Still from 1993 to 1996 he was Provincial Superior of Argentina-Paraguay.

Below we offer you the testimony that Fr. Gustavo gave us about the presence of Claret in his missionary life; text that appeared on this website on April 27, 2017. And we will conclude with two of his many poems, written when he was still a student.

I am Fr. Gustavo Alonso, cmf (Fr. Gustavo Alonso Taborda, was born in Santiago Temple, Córdoba Argentina, on August 12, 1931). In an age when my memory is losing its strength, I am invited by CESC in Vic to remember my first as well as present experiences of my life in relation to Claret, our Founder and inspirer. I collect what I can remember.

From childhood I remember the frequent presence of Claretian Missionaries who came to the parish of my town, invited by our good parish priest for various services of the Word. From these contacts came my admission to the Claretian minor seminary. There was much talk of “Blessed Father Claret” bishop and missionary, while all longed for his canonization. This would come some years after my first profession. The most familiar reading in the previous years was the Vida anecdótica of Claret, written by Fr. Félix Cruz Ugalde. Then we could access the Autobiography and important texts such as those written by the Frs. Puigdesens, Cristóbal Fernández, García Garcés and others. The date of the canonization was unforgettable, lived with great fervor in the house of formation of Villa Claret, Cordoba. From that time I remember that I even had the audacity to write a leaflet on Claret and Xifré for a popular series that was then published by the Editorial Claretiana.

To my priestly ordination (1955) followed the period of my studies of theology and spirituality in Rome, being part of the “terzo piano” of Parioli, where we had Father José M. Viñas as our encouraging responsible, who was also the director of the Studium Claretianum, begun shortly earlier in the same general curia. Some of the young people of that numerous group collaborated with him preparing the edition of the Autobiography published by the BAC in 1959; he guided other of us in the study of Claretian spirituality. That is why my doctoral thesis was devoted to the subject of the Claret school of prayer. On the other hand, the closeness of Fr. General Peter Schweiger and his teachings transmitted us the sentire cum Ecclesia of our Holy Founder. I believe that for all of us it was a providential preparation for the grace of the Council that would happen a few years later.

Back in my Province of Argentina-Uruguay, ten years of my life were dedicated to the formation of professed students, combining the teaching of theology and the history of the Church with formative functions of some of the groups. From there (times of John XXIII and Paul VI) we lived with youthful fervor the years of Vatican II and his slogan of “returning to the sources” for our renewal.

My apostolate, then and thereafter, has had two prevalent expressions: retreats or spiritual exercises, especially to religious, and writings. I must say that, for various reasons, I missed the popular mission, so Claretian. In my ministry I have often returned to Claret’s inspirational source: especially his Autobiography, Avisos a un sacerdote, the Carta al misionero Teófilo and some chapters of el Colegial instruido.

Since the Special Chapter of our Congregation (1967) many things changed in my life when I remained in Rome as a member of the General Government, first six years as secretary (1967-73) and, after a period as Provincial in Argentina-Uruguay 1974-79), as Superior General (1979-91). The conciliar renewal then led us all to an immersion in the Claretian charism, in a rather difficult context. Perhaps we can synthesize the vocational and intimate commitment of our team in what we understand as the two great tasks of the moment: the revision of our Constitutions and the reformulation of the mission of the Claretian today. Everything called us to a renewed communion with our Founder.

After that service and frustrated the dream of a mission ad gentes in Africa, I returned to my province (1992). Since then I have had some years of government – provincial and local – and above all collaboration in formation and then in some of our parishes. At the same time, commissioned by my superiors, I have written and published several books on Claretian history and spirituality. On the other hand, I have also published some writings for general readers that seek to introduce them to the experience of the Gospel and particularly to prayer and apostolic service. I have always cultivated a fraternal friendship, from our Founder’s roots, with the various branches of the Claretian Family with the closeness and the services that were within my reach. Following Claret, I have personally tried to nourish myself daily with the bread of the Word, the Eucharist and communion with Mary our Mother.

At this stage of my life everything is said in the past tense. At present my gratitude prevails for the Claretian vocation and the availability for small pastoral services in the area of ​​the community in which I live here in Buenos Aires.

The first of them is nothing less than the verse translation of one of the famous odes of Horace (65-8 BC): “Quid dedicatum…”:

And, finally, some verses with a flavour of Saint Juan de la Cruz, entitled: “Melodía claustral”: