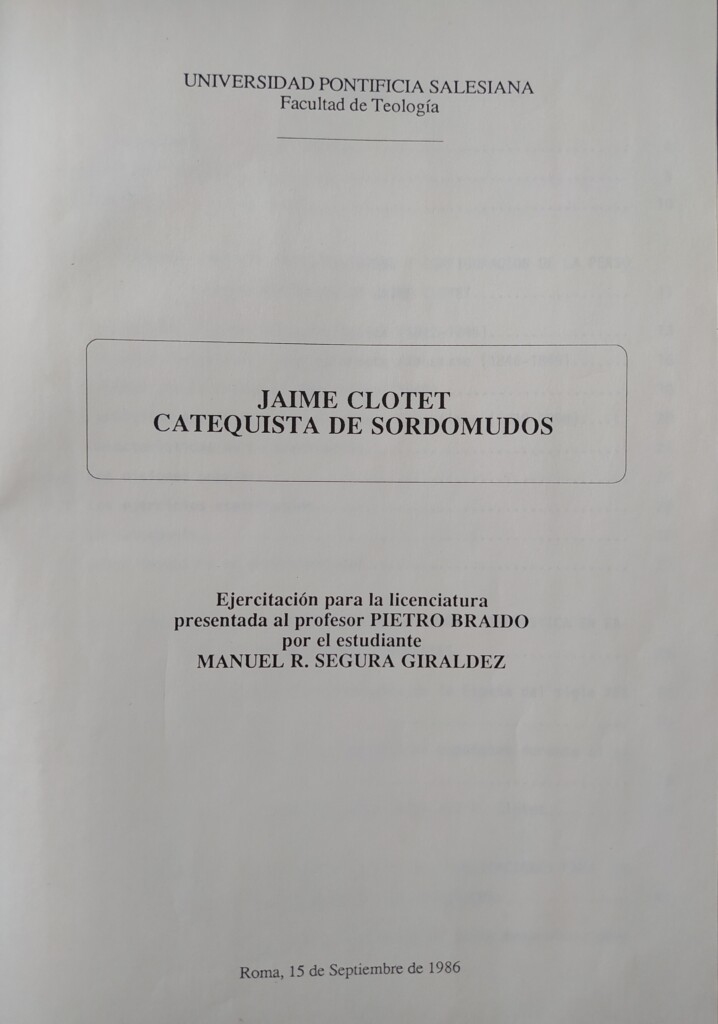 In the mid-nineteenth century a pastoral renewal movement arose in the Spanish Church. One of the aspects of this renewal was the world of the deaf-mute. On the one hand, these, using natural mimicry as the only means of communication, practiced an incomprehensible language that relegated them to perennial loneliness and abandonment. On the other hand, there was a generalized prejudice that sustained their low cognitive capacity. The priest Jaime Clotet (1822-1898), co-founder of the Claretian Congregation, tried to acquire, with a missionary spirit, the necessary competence to teach them the fundamentals of Christian life. This was the main motivation for his fruitful catechetical, informative and promotional activity in favour of the ignorant deaf-mutes. However, the itinerant apostolate in the early days of his Institute and, later, in part the tasks of government, prevented him from dedicating himself exclusively to said ministry. Despite this, the tenacious study, the practical experience and his innate capacity for observation, made him expand his knowledge of sign language, to the point of being able to develop a specific catechetical methodology, appropriate to the specific cognitive development of its recipients (cf. pp59-60). This was the originality and the value of his missionary apostolate, which gave him a certain and deserved fame that still lasts.

Segura carries out his study with a rich work of well documented notes (282, pp. 64-104) and with a bibliography (pp. 5-9) abundant and largely unpublished. He divides his work into three chapters: 1) in which, in a synthetic way, he presents the socio-religious environment that shaped Clotet’s apostolic personality (pp. 13-24); 2) genesis and development of his catechetical work in favour of the deaf-mute (pp. 25-41); 3) description and analysis of his publications for the Christian education of the deaf-mute (pp. 42-58).

In chapter I, as we said, he gives us a well-founded synthesis, with innumerable brushstrokes, about the environment, the formation, the apostolic and spiritual activity, and the personality of the character studied. A content that we have already specified in the previous reviews of the books by Garnica, Arranz and Lozano. That is why we will not repeat it here.

In chapter II Segura offers us another synthesis about a very unknown reality, that is, where and how the educational work in favour of the deaf came from. Something had begun to emerge in France and Italy as early as the 17th century, about a practically ignored pedagogical reality. Only at the end of the 18th century did the Jesuit Hervás write a catechism for the deaf-mute. In Spain, it was at the beginning of the 19th century that some concern arose in favour of a “national school for the deaf-mute”. In 1857, a law of public instruction determined the establishment, in each university district, of a college in order to provide the deaf and the blind with the corresponding instruction. It was above all the private initiative that brought it to fulfilment. There were two methods: the mimic and the oral. While in Italy the oral method prevailed, our protagonist leaned towards mimicry. And for Clotet, the providential meeting with the deaf man from Civit (1848), the town in which he was living his experience of parish work, was decisive. Thus, was born in him the desire to learn the art of speaking with signs for the catechesis of this type of person. The positions of deputy general director first, then general secretary, and local superior allowed him a stability that favoured his catechetical work, in a constant manner. He soon began with his publications: “La comunicación del pensamiento” (The Communication of Thought) (1866) and, above all, “El catecismo de los mudos” (The Catechism of the Mute) (1870). From the beginning, Clotet used the mimic method, which is the art of speaking to the eyes, without the aid of words or writing, by means of attitudes and movements of the hands, head and body, subject to certain rules observed by the deaf-mute. Little by little he was perfecting his method. At the end of his study (pp. 61-63), Segura offers appendices with drawings, showing what content is to be explained, what specific words must be highlighted and how to communicate them with sign language. It seems that Clotet later ended up leaving the religious instruction of deaf-mute women, probably cared for by some Carmelite Sister of Charity, and taught his method to other Claretians. In any case, Clotet did not try to found any type of school, which already existed, but his sole purpose was to help priests and other people in order to instruct in the truths of Christian doctrine; a purely apostolic purpose and for small groups.

In chapter III, Segura describes and analyses Clotet’s publications for the Christian education of the deaf-mute. He speaks of a first brief booklet from 1866, entitled: “La comunicación del pensamiento por medio de señas naturales, o sea, reglas para entender y hacerse entender de un sordomudo, útiles a los Sres. Párrocos, sacerdotes y maestros” (The communication of thought by means of natural signs, that is, rules to understand and be understood by a deaf-mute, useful to parish priests, priests and teachers). It starts from an extremely important theoretical assumption, and it is that “the deaf-mute uses a universal linguistic code, the logic of which is necessary to know in order to communicate with them” (p. 43). That is to say, “that two deaf-mutes from different countries (and languages), who have never seen each other, dealing with things of which one and the other have some knowledge, as a general rule they understand each other” (ibid.). These are signs that go beyond languages, so that two deaf and dumb people can understand each other, even if one does not know the language of the other, and even when it comes to some abstract or spiritual content. In short, a mimic language that goes beyond spoken languages. Understanding or being understood by a deaf-mute will depend on whether we know this “unique language” and on the level of instruction of the deaf-mute. Hence, the problem is not in the simple fact of being deaf-mute, but in their degree of knowledge of the signs common to others; and, when he does not understand the meaning of a term or a sign, it must be changed for another adapted to his talent. In this first booklet, he established the methodological and didactic presuppositions of his subsequent catechetical publications.

In 1870 he published “El catecismo de los mudos” (The Catechism for Mutes). In it he enters fully into the catechetical method to instruct a deaf-mute in some of the main truths of Christian doctrine (p. 49). For this, it uses 40 lessons and 72 illustrations. Where there are no illustrative images, he recommends using the prints from Fr. Claret’s “Catecismo explicado” (Catechism Explained). The doctrinal contents are framed in a historical-biblical structure, with some systematic developments. Next, Segura specifies the content of the various chapters: the history of salvation, the Church and its commandments, a small prayer book        …

In 1890 he still published “El catequista del sordomudo ignorante” (The Catechist of the Ignorant Deaf-mute), in which he tried to perfect his methodology, achieve greater expository clarity and more didactic value. He completed the contents, abandoned the historical-biblical structure and increased the notional tone.

Finally, in 1892 he offered “Suplemento de la obra del catequista del sordomudo ignorante, principales verdades sacadas de la misma” (the Supplement to the work of the catechist of the ignorant deaf-mute, main truths drawn from it). It contains the most important lessons of the catechism to which it refers.

On pp. 61-63, Segura adds three appendices with two drawings, as models of a didactic unit of Clotet’s work. There we see, for example, what is wanted to make known and how in fact the contents are explained, pointing out the words that must be highlighted and how they are made to be understood with the mimic language.

Although perhaps the study of Segura could have been broader and more exhaustive, it certainly allows us to enter into what was the peculiar apostolate and the novel contribution of Clotet in his going to meet the world of the deaf-mute. Eventually, if the reader wants to deepen it even more, the bibliography offered by the graduate and the notes throughout the study, open a very useful path.