Claret in the Canary Islands

Since March 11, 1848 until May 2, 1849, Father Claret missioned the Canary Islands. Although his missionary activity focused on Gran Canaria, the first three days he visited the diocese of Tenerife, where he greeted the bishop and preached to the people.

On March 14, Fr. Claret came to Las Palmas. The bishop of the Diocese of Canaries, Msgr. Buenaventura Codina, had requested the Vicar General of Vic the presence of the famous Catalan missionary to evangelize his recently assumed diocese. He remained on the island for fourteen months. The toured almost all of it, on foot, giving popular missions. The population at that time was about 64,000. The material situation was tragic. Poor harvests due to lack of rains in previous years had caused a real famine, which was aggravated by the outbreak of epidemics such as cholera and yellow fever. They caused thousands of deaths. The cultural level was very low; the islands had the highest illiteracy rate of all Spain. The pastoral situation of the diocese was not less regrettable. For decades the bishopric had gone through periods of high instability due to lack of bishops and ill relationship between these and the liberal governments. Priests, both diocesan and secularised religious, suffered economic hardships because the central government did not meet their payments, which led them to seek their livelihood outside the ministerial service. In addition, due to the low level of formation, priests were not up to the pastoral needs of the moment, and even stuck to strict Jansenist trends.

In this context, in which the faithful were suffering poverty and pastoral abandonment, Claret’s presence was a comfort and a boost of Christian life. So was it perceived by Bishop Codina when he said: “The coming of Mr. Claret to this diocese in my company was a singular benefit that God granted to me and all the faithful. His missions strengthened the almost lifeless faith and kindled the flame of charity in many of these islanders “. Actually, it was a permanent and uninterrupted mission. He began missioning the capital and then he moved to Telde and Agüimes. On the occasion of these missions, he wrote his “Very brief Catechism” for the Canary Islands. Then he resumed his missions going to Arucas, Gáldar, Guía, Moya and Firgas. He spent the month of October in Teror close to the Virgen del Pino, the Virgin patron of the Diocese. After that he returned to Las Palmas to preach spiritual exercises to seminarians. He finished the year 1848 preaching a mission in San Lorenzo, where he fell ill and had to return to the capital to recover. The last missionary campaign was held in San Bartolome de Tirajana, Tejeda and Santa Brigida. He said goodbye to Las Palmas with the preaching of the novena to Our Lady of Solitude of the “Portería”. Before returning to Catalonia, Father Claret missioned for ten days in Teguise and Arrecife, towns on the island of Lanzarote.

Tireless in his apostolic activity, he devoted most of the time to preaching and confession not forgetting the attention to children, spiritual formation of seminarians and the renewal of priestly life. His speech, clear and simple, along with his warm closeness penetrated deep into the Canarian people, who considered him a true saint and called him affectionately “El Padrito”. The grateful heart of Claret was not indifferent; therefore, he said: “These canarian islanders have stolen my heart so much that it will be very hard for me when the day comes that I must leave …”. 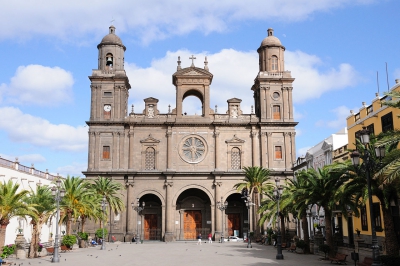