Claret was consecrated archbishop of Santiago de Cuba in the cathedral of Vic on October 6, 1850. On February 18, 1851 he took possession of his See, where he remained until March 22, 1857, day on which he left Santiago towards La Habana. From Madrid, he continued administering the archdiocese until March 8, 1860, when his successor, D. Manuel Maria Negueruela, took possession of the See.

To know how the situation of this archdiocese was in times of this missionary, let us be guided by himself who decided to get to know it thoroughly. Before travelling to Cuba he tried to learn as much as possible about it and having just arrived in that land he took advantage of his pastoral visits to make a direct contact. After carrying out his first visit he wrote to the Queen: “I have travelled, Lady, the most of my vast diocese; I myself have touched its hurting sores; I have looked into the evils which produce such outcomes; I have discovered its origin, and it is no other than abandonment and perfidy … “(EC I, 647). He immediately realized he was in the midst of a very different reality from that he was used to in Catalonia and the Canary Islands.

The largest island of the Antilles had extensive grounds which made it ideal for plantations of sugar cane, tobacco and coffee. These products were regarded as the new gold of by industrialized countries eagerly seeking raw materials for their big businesses. Thanks, especially, to sugar, Cuba was enjoying a period of economic boom. Hugh Thomas named the period between 1825 and 1868 The Golden Age and said: “The wealth of Cuba between 1823 and the end of the nineteenth century reached extremely high levels. The extended absolute powers of the general captains turned into a real dictatorship … Slavery and the slave trade, although the latter was illegal, were the institutions on which the wealth and dictatorship settled “(cf. THOMAS, Hugh , Cuba, the struggle for freedom, 1762-1909, Barcelona, 1973, 153).

The Cuban population had outnumbered the million inhabitants, of which about 450,000 were black, some 60,000 Chinese, 30,000 from various backgrounds, including Haitians, French, English, American, Portuguese, etc. The rest were Hispanic, of which most were born in Cuba and were called Criollos. Wealth had brought about such economic progress that in 1830, Cuba was the first place in all Latin America that had a railway line even before the mother land. But unfortunately, this progress was based mainly on the blood and sweat of slaves. It is estimated that between 1823 and 1865 entered the island some 400,000 slaves bought in Africa; in 1841, they accounted for 43.5 percent of the entire population. The Island also was in political turmoil for the sought-after independence; in fact, these were years in which the movements of revolt against Spain multiplied, and that situation was aggravated by strong internal divisions on this issue. Some sought to preserve the status quo as it was while some other craved independence from Spain either wholly or as annexation to the US which was guaranteeing the slave laws continuity.

At ecclesiastical level, the island was enclosed in two dioceses, the Havana diocese and the Santiago de Cuba one. The latter was the oldest and it covered an area of 55,000 kilometers and a population of 240,000 inhabitants, for which it had only 125 priests in 41 parishes. The archdiocese had been without archbishop for 14 years since Mons. Cirilo Alameda i Brea, one of the most politicized churchmen of the nineteenth century, had had to flee in 1837 to avoid being jailed for openly supporting the Carlist Party. This long absence of the pastor had caused relaxation of the clergy and pastoral neglect, and much more so if we consider that in 1835, like in the Peninsula, all religious congregations had been expelled,  having been these institutions those which were carrying out the main part of evangelization. The new Archbishop faced a precarious situation in every aspect.

In summary we can say that among the main social challenges of this Cuban era there were: the excruciating problem of slavery, injustices committed by many European traders turned into bourgeois tyrants, a strong network of political corruption, the scandalous social differences, tense instances for or against independence, the influence of the US trying to expand its economic power, the prohibition of interracial marriages and an anticlerical wave coming from European masonic groups.

What were the keys to the analysis of reality that made the new Archbishop? In several letters, Claret revealed that his study of reality addressed, above all, to discover the causes of the evils that prevented his people from living their faith among this social environment. He was not a spiritualist bishop who took refuge in the intra-ecclesial world and back to the reality suffered by his people. In a lucid letter addressed to Fr. Esteban Sala, two years after his arrival in Cuba, he expressed concern about discovering with sorrow the presence of “principles of destruction, corruption and provocation of divine justice, and they will surely manage it “(cf. EC I, 704-707).

For Claret these principles of destruction were not theoretical but really embodied especially in three groups of people listed and described, in the same letter. First, the abogadillos, or young lawyers who had studied law in USA, not living as Christians and favouring the interests of foreign powers. Second, the slave traders who, although they had their slaves baptized, they lived “as brutes” who did not recognize the dignity of the human being, and treated God’s children as if they were horses or mares and prevented the evangelization of slaves . Third, the big traders, about whom he said: “They are wicked, never confess or take communion, nor will hear Mass, all live in concubinage, or have illicit relations with mulatto and black women, and do not worship other god but interest”.

In the letter to the Queen, already mentioned, Claret delved into the roots of social ills and spoke of abandonment and perfidy. He meant the abandonment in which the simple people were because the clergy was not sufficiently formed and because the civil authorities, motivated by selfish interests, did not care for either justice or peace. Also, he was referring to the perfidy shown by Protestant sects with their proselytism, which fostered religious confusion and disaffection to Spain among the islanders. Taking into account the inevitable ideological constraints of the nineteenth century, the Archbishop was right with the root of the evils: lack of prepared leaders and the need for comprehensive Catholic education. He went on to say with emphasis to the Queen: “Do not leave education in the hands of speculators as if were any commodity; let us  dispense with concerns, and if we find a wise and holy institute in the Church and perfectly able to put together the lights of the century and the light of the gospel, let us call it to our help … let us look only to the evils of society that require prompt remedy … “(cf. EC I, 650).

By sharpening his gaze to detect the evils of his archdiocese, Claret never lost sight of the whole of reality; he also discovered its goodness. In the same letter to Fr. Sala he said: “The people cannot be in any better disposition, all attend the holy Mission and receive the holy sacraments …” (cf. EC I, 706). In a previous letter, addressed to D. Fortian Bres, he said: “… you cannot imagine the docility of these people, the fruit that the missions have produced and are currently producing; what fervor! what devotion! … “(cf. EC I, 620). The Archbishop noticed the religious soul of his faithful open to the seeds of the Gospel and knew that all his missionary zeal and his efforts were worth to improve their spiritual and social life.

It is noteworthy how Claret breaks church molds of the time by doing this kind of analysis of reality so insightful and bold, without the current sociological resources. He was not a theoretical scholar of reality; he was in fact a missionary who wondered: Why did not the gospel message get rooted in the hearts of his faithful and did not permeate their social and cultural life? He was a practical man who analyzed reality in order to successfully undertake his missionary actions. 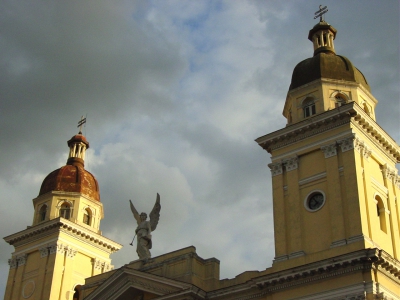