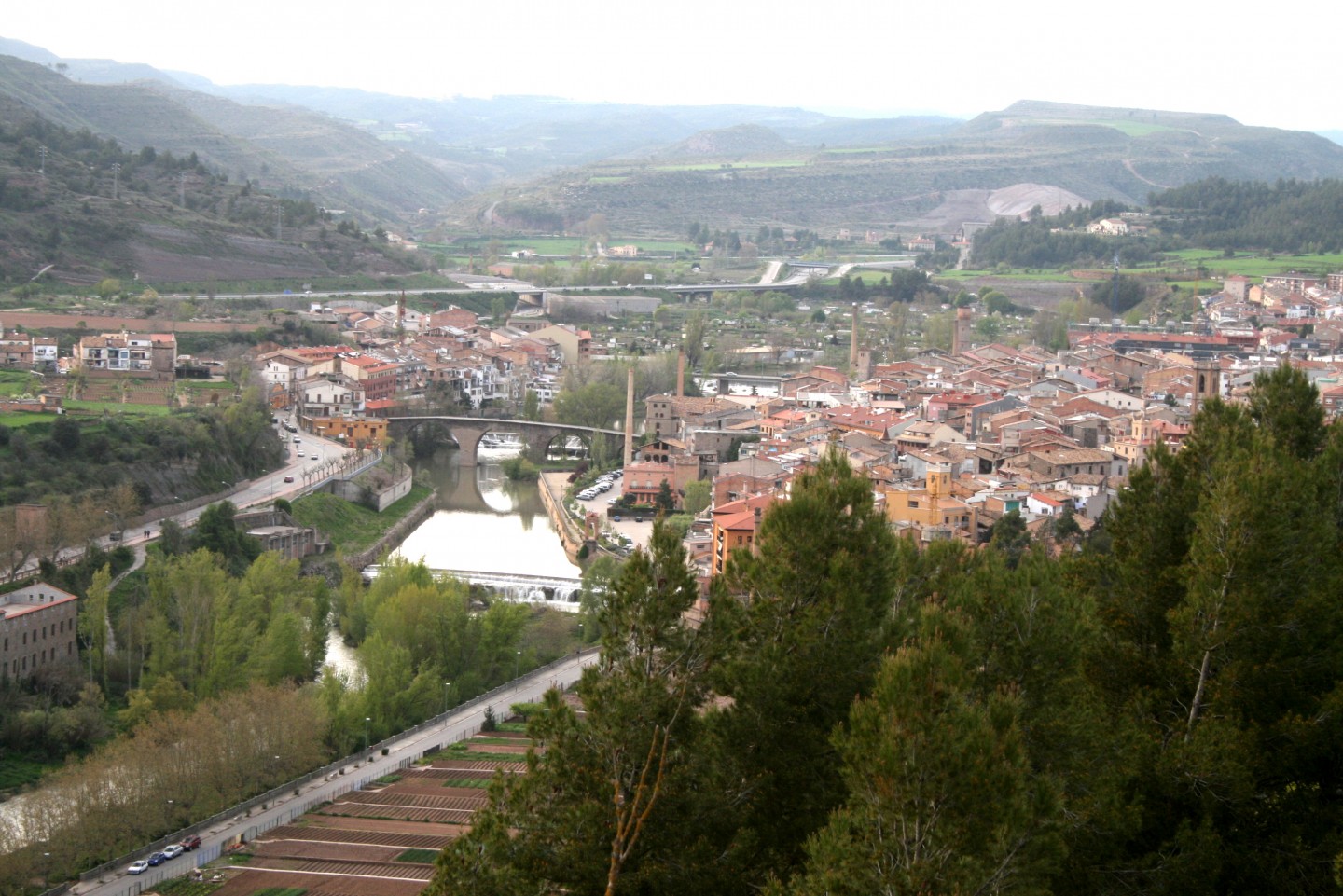 The village of Salient is situated in the very centre of the territory of the Pla de Bages and drenched with the waters of the river Llobregat. It belongs to the province of Barcelona and the jurisdiction of Manresa. It is 63 and 13 kilometers respectively from these cities.

In 1882, at the start of the nineteenth century, its population was 1.600. In the twentieth century, during the height of its industrial development, it attained a population of 9.227 inhabitants.

At present there are some 7.300 persons in the village, which has expanded to both sides of the river connected by an historic bridge.

The municipal area covers 66 square kilometers. The neighboring municipalities are Gaià to the north, and Avinyo and Artés to the east.

The saint born in Salient preached in the neighboring villages: Sant Fructuós de Bages in the afternoons, and Santpedor, Castellnou de Bages and Balsareny in the evenings.

From 1929 on, potassium salt was extracted from its mines. This industrial village gets the name Sallent from the river Llobregat which leaps over a total of five waterfalls on its way through the village. It is precisely because of this exceptional wealth of water that Sallent was one of the first places to mechanize its factories. As a prominent figure from Salient, Anthony Mary Claret commemorates the village where he was born on 23 December 1807 in his episcopal emblem:

«The bridge, river, waterfall and house indicate Salient, my native place; my father is from this part o f the river and my mother from the other side, and thus they are symbolized: Claret as the sun and Clara as the moon.» (Letter o f 25 July 1850)

While crossing this historical bridge, it is worthwhile to stop and contemplate the view of this village with its smokestacks, well-preserved till now; the foundations of factories that remind us of the good old days of industry in the village; the rush of the water, the houses and walls of the old part of the village that face the river.

This also brings to mind the impetuous flood of 24 January 1747 which carried away the old 14th century bridge. King Ferdinand VI gave a royal order in August of 1748 to rebuild the bridge which was vitally necessary for the village. Ignacio Castells from Manresa drew the plans and constructed the new bridge at the end of the 18th century. In 1972, this bridge was named after Pere Otger who was mayor of Sallent in 1872, the year in which the work on the old bridge was probably completed. The present bridge, partially rebuilt and renovated, is the one Anthony Mary Claret walked over when he was a small boy, young textile worker, seminarian, benefice-holder, parish administrator, missionary of Catalonia, and archbishop of Cuba. (Excerpt from the Guide posted on this website,  Section: Library-Claretian Guides) 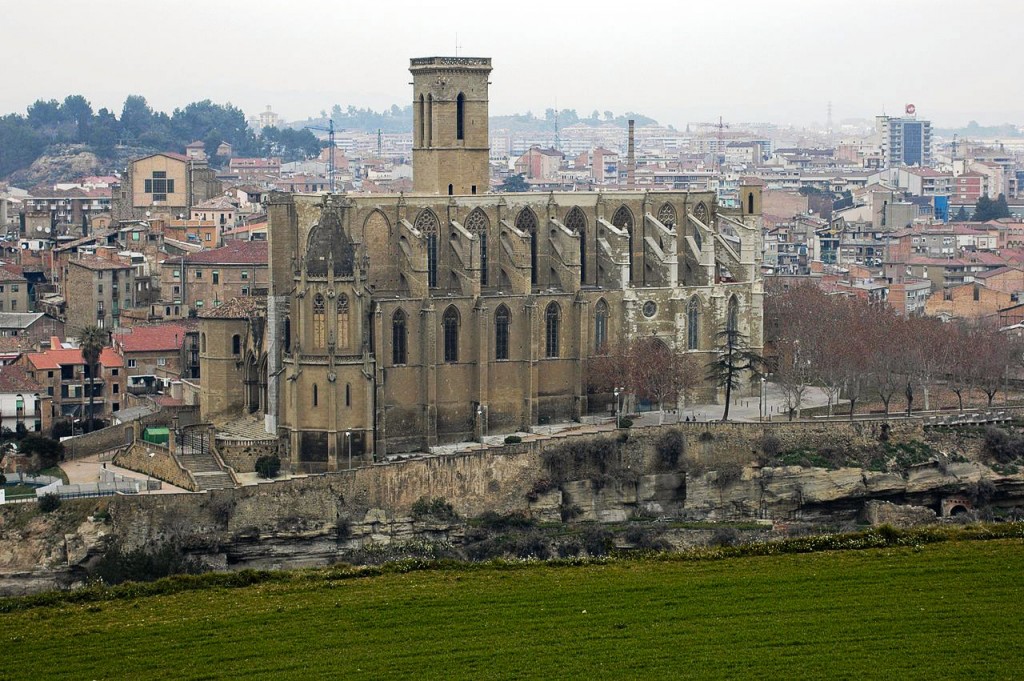 The city of Manresa, with its nearly 70,000 inhabitants, is the heart of Catalonia. It is one of the most ancient and noble settlements of the principality. Capital of the district or region of Bages and central Catalonia, it is situated at the confluence of two industrial rivers, the Llobregat and the Cardener, in the shade of the jutting rocks of Montserrat.

Manresa is the Minorisa of the Romans, and there are clear traces of human settlement from neolitic times. The present city is a mixture of religious buildings and industrial factories. With the medieval bridge of the Cardener at its feet, the lady of the city, the gothic basilica of the See, dedicated to St. Mary, dominates the old quarter. The oldest part of the city, girded by the waters of the two rivers, appears dense and compact, a mixture of ancient vapors and modern life, medieval in style but with its central artery, the old highway to Vic, full of movement.

Manresa has had a special leading role in the history of the principality, and the monuments of this history still stand: the co-cathedral (XIV), the city hall (XVIII) where the Foundations of Manresa of 1892 were debated and approved, the cout- house, and the so-called Cave of St. Ignatius, a baroque testament in stone completed in 1820 and currently a center of spirituality.

In the modern city we find Peter III Boulevard, the actual main street of Manresa, which was begun the same time in the XIX century as Puigferrà Park and, further on, Agulla Park.

Today Manresa is a city abounding in life and movement, a great industrial center in the heart of Catalonia, even though the textile crisis has had strong repercussions there. The city is expanding into the Pla de Bages, thanks to the crosscountry expressway that connects the east and west sides of the Principality, and the freeway, the umbilical cord of rapid communication with the capital Barcelona.

Industry is very diversified at present, the most important being those of met- alurgy, chemistry and leather. The textile industry, the most traditional, has become the smallest sector of all due to the crisis of the 70’s.

Because of its centrality in Catalonia and its nearness to Salient, Manresa played a significant role in the life of the Catalonian missionary, Father Claret, during his youth, and during the years of his itinerant preaching in Catalonia. It is obvious that when he was a young weaver he felt a special fondness for this capital of Bages, just a few kilometers from his birthplace in Sallent. Manresa was an obligatory stop, going and coming from Barcelona and Vic, first during his technical studies, and later during his ecclesiastical studies. Here he would meet his relatives, aunt and godmother Maria Claret, uncle Adjutor and cousin Anthony, who lived on St. Lucy Street. (Excerpt from the Guide posted on this website,  Section: Library-Claretian Guides) 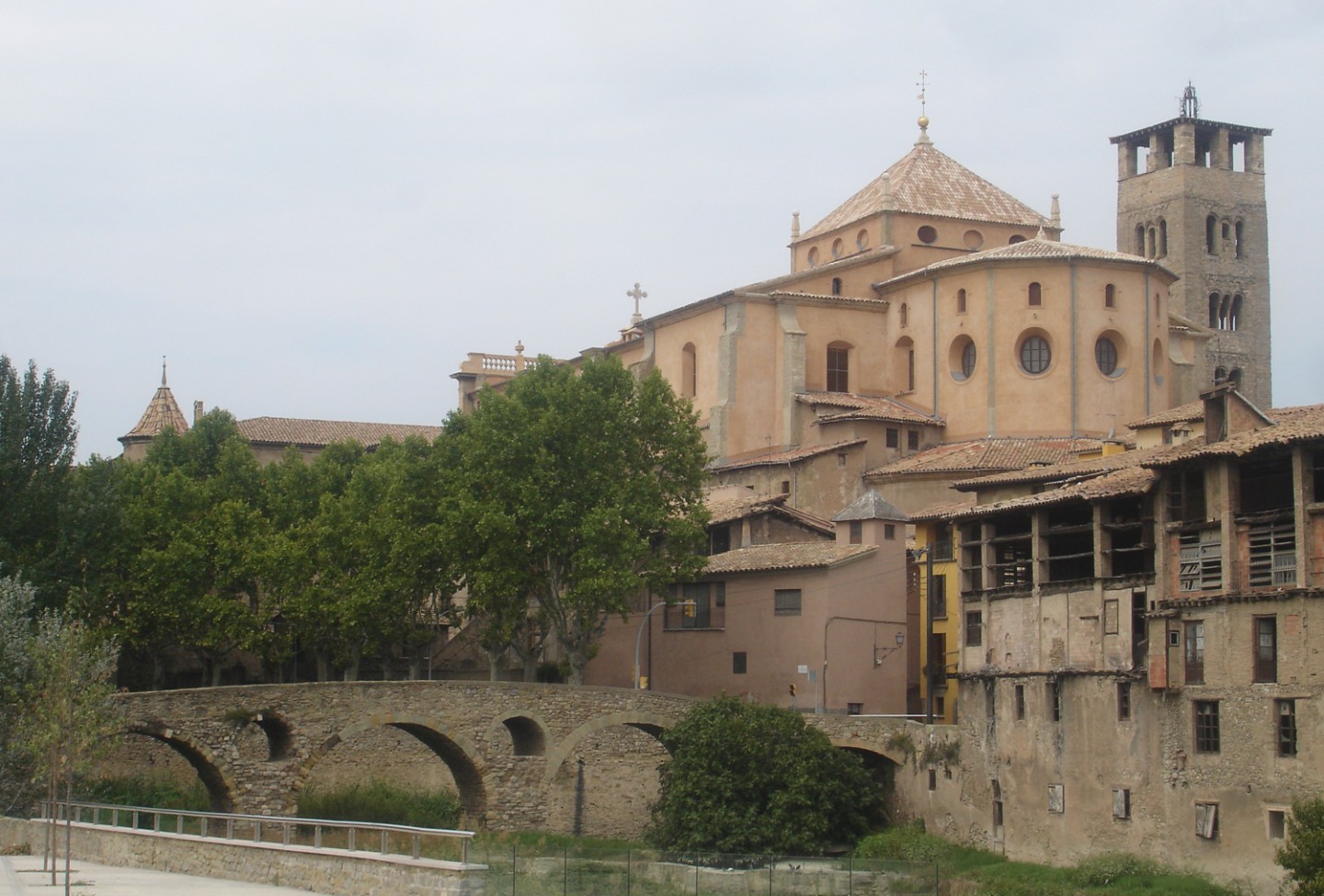 The city of Vic is located in the heart of the picturesque Osona region, in the principality of Catalonia. Both the region and the city have been and still are a historical nucleus inseparable from the culture and life of Catalans. The city shows its ancient history, lordly and ecclesiastical, through its monuments, squares and streets in the old city center. The Main Square, with its arcades and surrounded by old renovated houses such as the House of the City, are witness to this history of Vic, built through centuries.

Under an apparent tranquility and the gray humidity of the winter fog proper to the Plain, Vic is a city full of history and art, and rich for its commerce, industry and agriculture.

Some 70 km from Barcelona and not far from the Pyrenees, Vic existed in the 4th century B.C. under the name of Ausa. It was the seat of a large diocese from 516 up to the Arab invasion. Guifré el Pilós reconquered it in 879 and became the head of an earldom of the Spanish March. The new city began to grow at the foot of the old Ausona, taking the name of «vicus» or suburb, whence today’s name of Vic. It still keeps today the title of capital city of a beautiful and large region, Ausona.

Anthony Mary Claret, born in Sallent in December 23, 1807, comes for the first time on September 29, 1829 to this historical city.

He enters by the Remei bridge and through Sant Pere street. He comes to begin his ecclesiastical studies that will last six years.

He resides in Vic from January 1841 marking the start of his missionary life through the villages of Catalonia and the Canary Islands.

Here he founds the Congregation of Missionaries Sons of the Immaculate Heart of Mary on July 16, 1849 In its cathedral, he is consecrated bishop of Santiago de Cuba, October 6, 1850.

Vic, the city of many saints, is the city of Saint Anthony Mary Claret too. (Excerpt from the Guide posted on this website,  Section: Library-Claretian Guides) 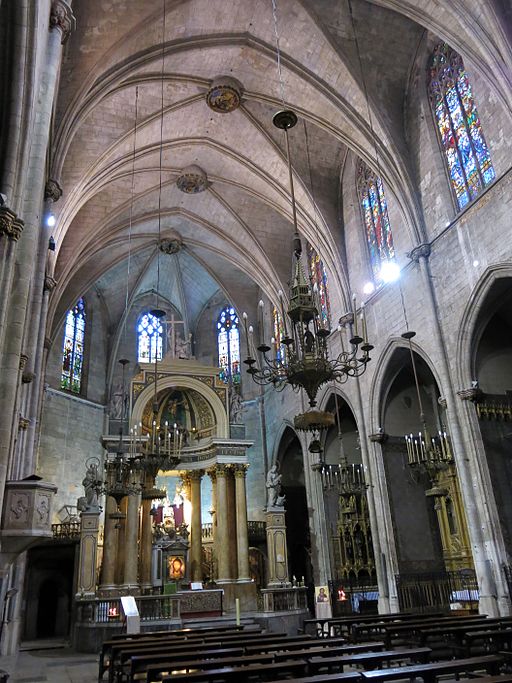 Geographically, the city is seated in the Mediterranean coast, in a plan of five kilometers wide, open to the sea, embraced by the rivers Llobregat and Besòs, at the foot of and protected by the mountain range of Collserola. The city enjoys a soft, mild climate in the winter and hot in the summer.

The current urban structure of this great city is the fruit of four different epochs. From the first phase there remains the «old nucleus», the primitive medieval nucleus, seated on the place called «Mons Tàber», fortified with Roman ramparts that have now disappeared.The Cathedral, royal palace (presently the City’s History Museum) and the church of Sts. Just and Pastor are from this epoch.

The remainder of the ancient city was constructed in the second phase. This part is closer «to the sands» with the churches of «El Pi» and Santa Maria del Mar, the old suburb of Montsió, and the Avenue of La Rambla that separates the Ciutat Vella from the Raval where the Palau de la Virreina is found.

The third epoch, in the middle of the 19th century, corresponds to the main urban expansion of Barcelona with the Cerdà Project or «L’Eixample». The Square of Catalonia and the Passeig de Gràcia are the heart of the new Barcelona which made the urban annexation of the autonomous populations neighboring the capital possible: Gràcia, Pedralbes, Tres Torres, Montbau, Poblenou, and so on. This expansion constitutes the fourth urban phase of Barcelona. At present, the Rovira and Vallvidrera tunnels have opened new avenues of expansion towards Vallès.

The Catalans have reason to feel proud of their «Head and Home», the capital of a land of indisputable vitality.

And it is hear in this city, as we shall see, that our saint, Anthony Mary Claret lived as a young textile student and industrial technician. Later on, he preached hear as missionary and archbishop. Here he founded the publishing house of his Religious Library. In this city, as royal confessor, he accompanied Queen Isabel II and the royal family. And here, as founder, he lived together with his missionaries, the Sons of the Immaculate Heart of Mary. (Excerpt from the Guide posted on this website,  Section: Library-Claretian Guides) 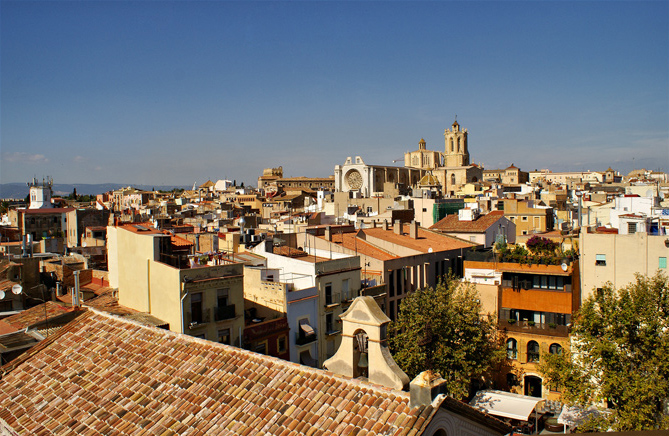 This year 2007, the bicentenary year of the birth of St. Anthony Mary Claret, the “Aplec de l’Esperit,” the religious event of the youth of the whole Catalonia, has commemorated in the beach of Tarragona, the arrival of St. Paul to our lands to envangelize the people of the historie Tarraco and to give birth to Church that lasts till our time.

The gospel proclamation took place in this city in the first and in the beginnings second of centuries, when the Romans achieved uniting internally all the Catalonian territory and gave a capital called, Tarraco, the most important city ofthe Hispania Citerior, the harbourof the whole Iberian península.

The tradition which makes St. Paul to reach till Tarraco, the present Tarragona, enjoys a respectful tradition. The same apostle in his letter to the Romans, written around the year 57, tells that he wants to visit Hispania. It was not possible at that moment. He was imprisoned in Palestine and shifted later on to Rome and placed under custody in the capital ofthe Román empire. However, after many years between 63 to his death, his desire of announcing the Cospel of Jesús in our land would have been fulfilled.

The tradition of the stay of Saint Paul and his woman disciple St. Tecla in Tarragona is not documented till the 9th century. But the tradition ofthe fact is rooted for centuries in the religious past of our Church and in her historical memory.(Excerpt from the Guide posted on this website,  Section: Library-Claretian Guides) 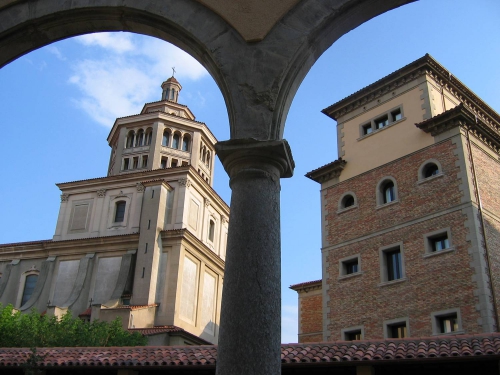 Temple and cloister of the Mother House of Vic.