Madrid in times of Fr. Claret

The Madrid city that Fr.Claret met when he arrived from Cuba in 1857 was different from the city he had seen in 1848 on the occasion of his journey to the Canary Islands, and in 1850, when he received the archbishop pallium from Nuncio Brunelli. It was a city which was trying to become a European city. Its population was reaching some 400,000 inhabitants. It was a city somewhat uncared for and unassisted. However, the Plaza Mayor had just been restored (1853) and everybody was expecting the full reform of the Puerta del Sol, which being a small-town square turned into a City Square in 1859. An extension plan was under serious consideration, which was carried out with the creation of the districts of Arguelles (1862), Atocha and Salamanca (1863), Bellas Vistas (1866) and first district of Conception (1867) .In 1858 the first fountain of the Canal of Isabel II was opened opposite the Sisters of Caballero de Gracia, in San Bernardo Street. In 1865 the first trial of public lighting net was made and the big marketplaces of Mostenses and la Cebada were built.

With regard to religious buildings, after the disaster of the confiscation, ancient churches such as Santa Maria, San Martin, Santo Domingo were demolished while new churches were opened such as San Francisco (1860) and the new Buen Suceso (1868).

Madrid was experiencing an intense associational activity especially cultural. The National Library was opened in 1866, along with other public libraries. The University located in the Novitiate of the Jesuits of San Bernardo, was living the turmoil of the times with continuous riots, strikes and battles against the police guard. The publication of the famous article by Don Emilio Castelar “El Rasgo” on April 10, 1865, was one of the major reasons of upheaval in the educational institutions of Madrid.

It is a time when reading is encouraged through affordable popular editions: the Economical Popular Library in 1861, the Economical Library for Instruction and Recreation in 1868. And the periodical press is experiencing a moment of maximum political turmoil. Especially publications with a marked satirical bias increase dramatically.

Meanwhile, the people, as usual, continue attending the festivals of San Antonio, coming down on May 15 to the meadow of San Isidro and in September they go to the Royal Site of El Pardo to pick acorns. The most frequent entertainments are bulls and theater. Cafés overcome taverns, and dancing is king fun of the Villa. In bullfighting, figures such as Tato, Gordito, Cúchares, Frascuelo and Lagartijo are popular heroes.

As for political events, to be highlighted are the victory of O’Donnell in Africa in 1860, the uprising of San Gil Barracks in 1866 and the flight of the Queen in September 1868. Such events had a direct repercussion in the city life.

And finally, the background curtain: The Palace of Queen Elizabeth II which was the center of all the tribulations and misfortunes of those years for Spain, for the Queen and for Fr.Claret. Another factor was the unhappy royal marriage with Francisco de Asís, a man with a rather delicate appearance but with capacity and energy. This is not the place to expand on the “Palace matters”, in which Claret was involved along with other personalities, all of them slandered and vilified in public view.

During the time of Fr. Claret in Madrid church organization was not as it is today. Madrid was part of the Archbishopric of Toledo (until 1885). There was a representative, a Vicar, who was usually the titular bishop. His residence was the mansion house of Cardinal Infante, on San Justo Street and overlooking Pasa Street, current residence of the Archbishop. At the time of Fr. Claret the Vicars had been, among others, Don Bienvenido Monzón, title holder of Lystra (1861-1862) and Don Francisco de Sales Crespo, title holder of Archis (1862-1875). Cardinal Archbishop of Toledo at this time was Fray Cirilo Alameda y Brea (1858-1875).

The clergy then could be described as “scattered and impoverished” due to secularization and confiscation laws. Some were clinging to old patterns while others were more prone to the liberalism of the time.Their pastoral activity was quite often reduced  to Sunday Mass and a simple and somewhat blunt preaching. Catechesis was almost reduced to Lent, and pastoral activity, except the Mass, consisted of Confession and Communion of the faithful once a year. On top of that, there were many “punished priests.”

At the same time some spectacular, magnificent and almost theatrical cult was spreading. Preaching was grandiloquent and hardly mentioning the fundamental aspects of faith. There was no systematic parochial organization. Nevertheless, there were plenty of worthy and even illustrious priests at that time.

In addition to the parishes in Madrid there were many other convents, churches, oratories and chapels, in spite of the French invasion and the confiscation, which can largely be described in this booklet. (Excerpt from the Guide posted on this website,  Section: Library-Claretian Guides)

Claret’s stay in Madrid for 11 years (1857-1868) extended his influence and presence to the outskirts of the capital, particularly to places related to the Royal House to which he was so closely linked because of his function as Confessor of Queen Elizabeth II.

He would soon also involve the Claretian Missionaries in that task. First he tried to bring them with him for the evangelization of central Spain from the Escorial, having been appointed President of the Royal Monastery in 1859.

This desire could not be carried out  due to the priority given by Fr José Xifré to the foundation in Gracia, in Barcelona, ​​thus preventing the spread of the Congregation to the center of Spain. But soon after, and this time successfully, he managed to find a place in Segovia for his missionaries in 1861, fruit of his trips with the Queen to La Granja de San Ildefonso.

But these are not the only places that witnessed the presence of Claret; there were other places as well: the roads from Madrid to Segovia, Avila and Toledo also speak of the Claretian presence around Madrid. . (Excerpt from the Guide posted on this website,  Section: Library-Claretian Guides) 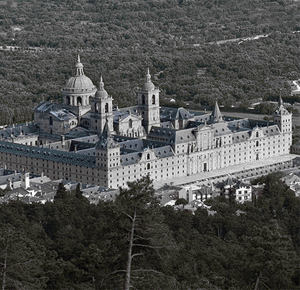