Studia Claretiana, as Fr. Guillermo Rozo, C.M.F., President of the Claretian Secretariat said when introducing the first volume in 1963, aims to help widen and consolidate the apostolic enterprises of the Claretian Missionaries and of the other members of the Claretian Family. This will take place “inasmuch as they conform to the spirit of the Father and his plans and apostolic deeds: hence the concern to know them and report them” (v I p. 3.).

Initially it was intended to make it come out biannually and under the direction of the Claretian Secretariat in Rome (cf. v. I p. 4). Indeed, the subtitle of the first issue said: “fasciculi studiis semesters of Santo Antonio M. Claret fovendis editi”. However, as you can see in the other captions in this section, it came out more or less annually, and even not every year.

As for the theme, it has been sought to focus predominantly on the figure and spirituality of Fr. Claret, either globally considered or specifically in some aspects such as places, historical moments or particularly significant characters who worked apostolically with him. Often it also has focused on events of the Congregation of Missionaries and other groups of the Claretian Family, their meetings and congresses. Although the primary intention is to deepen the spiritual, charismatic and historical knowledge of the Saint, it has never been limited to a kind of archaeologic research, but rather seeing it from today’s perspective in order to embody and propagate it today. Normally each volume is divided into three parts: studies themselves, which occupy most of the edition, Congregational ephemeris, notes and Claretian bibliography.

To facilitate knowledge of the contents, authors, volume as well as pages where they are to be found, the reader can find in another subtitle of this section a triple index: 1) the complete indexes of each of the first thirty volumes, by chronological order of publication; 2) the authors, in alphabetical order, with their respective contributions; and 3) the main thematic or personal topics studied, in alphabetical order. 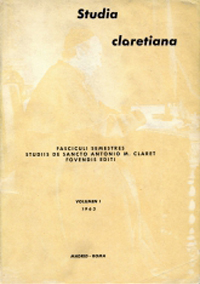