We make available the first biography, not a mere biographical review, of Saint Anthony M. Claret, published the year after his death.

The author, D. Francisco de Asís Aguilar, a personal friend of the saint, and later bishop of Segorbe, was a recognized publicist, expert in history and ecclesiastical biography. Given his competence in these fields, the Missionaries immediately thought of his influence and his pen to make known the true figure of his Founder.

On November 4, 1870, Fr. Clotet sent to him from Prades, for publication, some biographical notes on Claret, who had died eleven days before. D. Francisco Aguilar had them published immediately in three different journals. But, not satisfied with this, on November 30 he wrote to Fr. Clotet: “I want to do a fairly complete job to destroy all the slanders and leave the detractors in shame, leaving for you to write the pious life and the Grace”. This proposal was received with gratitude by the Congregation and D. Aguilar was offered as much material as possible for the task.

Mr. Aguilar counted with the Autobiography of Claret (he was one of the first to know about its existence), with reports that he requested from numerous people who had treated him directly, and with his abundant personal memories. At lightning speed, the work was appearing in installments in the magazine La Ciudad de Dios throughout 1871, until the end of that year when the full volume was published. Such well-documented and fresh study is a must in order to know the person and work of Claret; and its vindicating orientation of the honour of the missionary saint in front of pseudobiographical and defamatory writings (by Olózaga, Funes y Lustano, E. Blázquez …) does not diminish its balance, objectivity and solidity.

He was born in 1826 in the town of Manlleu (Barcelona), 9 kilometers from Vic. He studied at the seminary of Vic and at the University of Barcelona, ​​where he graduated in natural sciences. He met Fr. Claret during his seminary years, and in April 1850 he accompanied him on a trip from Barcelona to Girona, where Claret preached his last mission before leaving for Cuba. He was ordained priest in 1854.

Being professor of the seminary of Vic, in 1863 he was called by Fr. Claret to go to El Escorial, where he remained nearly for two years as a director of the secondary school and professor of the seminary; in 1868-69 he taught again at that school. In 1865 he founded the Colegio Mayor “Santo Tomás de Aquino” in Madrid and in 1875 the College of Catholic Studies, of short duration. From 1878 to 1880 he was rector of the seminary of Cordoba, and in 1880 he was consecrated bishop of Segorbe. In  June of the year 1897 he presided over, together with the bishop of the diocese and the abbot of Fontfroide, the solemn funeral in Vic in honour of Fr. Claret when his remains were transferred from the Cistercian monastery to the Levitical city.

As a writer, he stood out in the field of apologetics and biography. He published a Compendium of General Ecclesiastical History (2 vol., 1874), and other works of lesser length, such as What are the nuns for? (18692), Historical errors (1880), News of Segorbe and its bishopric (1890). He collaborated in several periodicals, from which he fought energetically against evolutionary theories, liberalism and Freemasonry. 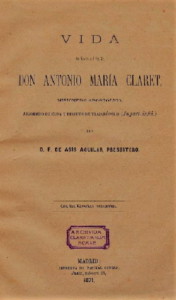