The Venerable Fr. Jaime Clotet was the faithful custodian of the writings and testimonies concerning Fr. Claret and, furthermore, the great promoter of his cause for beatification. Therefore, he had many materials to write a good Claretian biography. With the haste of time, twelve years after Fr. Claret’s death, he published Resumen de la admirable vida del Excmo. e Ilmo. Sr. Don Antonio María Claret y Clará, Barcelona 1882. However, he realized that this work was too short. For the next ten years, he devoted himself to writing a great biography of Fr. Claret entitled Vida edificante del Padre Claret, Misionero y Fundador. The 847-page manuscript was ready in 1892, but it was not published because one of the two censors, whom Fr. General had commissioned to review it, gave a negative report. Then, Fr. Xifré himself commissioned Fr. Clotet to deliver all his materials to Fr. Mariano Aguilar so that he could write a new Claretian biography, which was published in two volumes with the title Vida admirable del siervo de Dios P. Antonio María Claret, fundador de la Congregación de los Misioneros Hijos del Inmaculado Corazón de María, Madrid 1894. Fr. Clotet’s enormous work saw the light in 2000, thanks to the transcription and revision work of Fr. Jesús Bermejo. It is a very rich work because it was written by one of the co-founders of the Claretian Congregation who always greatly admired its Founder and dedicated himself to recovering his memory, saving documents and collecting first-hand testimonies. The freshness and richness of these materials make his work a primary source to fully understand the life and mission of Saint Anthony María Claret 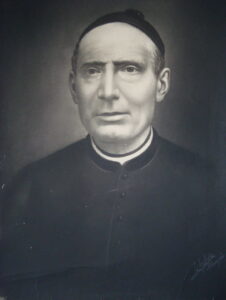 Ordained a priest in Rome in 1845, on July 16, 1849 he participated as a co-founder in the birth of the Claretian Congregation, of which he was Deputy Director General from 1858 to 1888. He dedicated himself to preaching and especially to the catechesis of deaf-mutes, for whom he published a Catechism and a catechist manual.

He professed enormous admiration for the Founder, Saint Anthony M. Claret, with whom he lived for short periods and whom he accompanied on his last illness and death in the Fontfroide monastery. In the weeks following his death, he published in the Diocesan Bulletin of Vic some warm biographical Notes titled Apuntes biográficos del Excmo. e Ilmo. Sr. D. Antonio María Claret, and he immediately promoted the composition of the first biography of the Saint by his friend D. Francisco de Asís Aguilar (1871), to whom he provided abundant and valuable information.

In 1882 he published his Resumen de la Admirable Vida del Excmo. e Ilmo. Sr. D. Antonio María Claret y Clará, biography followed by a rich collection of testimonies. Finally, commissioned by Fr. José Xifré, in 1891-92 he drew up his Vida Edificante del P. Claret, Misionero y Fundador, of almost 1,000 pages, which remained unpublished until the year 2000. From 1889 he worked diligently for the beatification of the Founder Father. 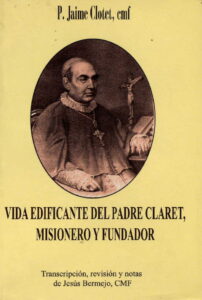